Created for the Vision of science exhibition , The Edge, University of Bath

I really wanted to stress my approach was to respond creatively to the researcher’s work I was going to be paired with. As such it is difficult for me to assess my project in terms of success. I was keen to enter into a fruitful dialogue where the scientist and the artist were both involved in the creative process. It is undeniable that scientific research is far removed from artistic practice but there are also similarities where thinking outside the box are equally important in both fields. Now my initial concept was to produce an artwork inspired by Algae blooms. However after a discussion with Rod Scott it appeared that we were way more interested in talking about his own research on plant pollen tetrads. I offered to recreate the microscopic structure using 3d printing technology.
As Bath University had a reputation for 3d printing I was keen to use the university resources…

I contacted the Physics and the engineering departments both were very helpful and generous with their time but it became apparent that the complex organic model required a 3d technique that would require quite a lot of trial and error.
Dual printing allows the 3d printer to print 3d shapes in one material and print support material in a dissolvable material , allowing complex organic shapes to be printed. Therefore I had to produce the print by a company used to print models for the special FX industry. Because of the additive printing process the print has an interesting perlescant aspect I am told is close to the coating covering pollen tetrads in plants so I decided not to colour or spray paint the model in the end. I am hoping that this model will be a useful model for teaching the subject of plant research. The concept behind the piece titled “Cross pollination” is inspired by natural patterns that appear on many levels from microscopic surface of a pollen grain , leaf structures, to crystalline volcanic rock formations. It was directly inspired by my discussion with Prof Rod Scott, it is also an development from the Tetrad 3d print and indeed I used 3d printing material to model the patterns themselves. 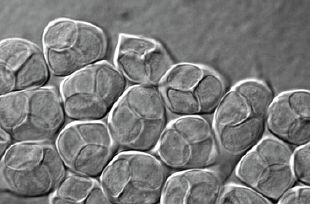